According to the Toronto Sun

A Russian doctor Anastasia Ivashevskaya has caused a bit of controversy lately with her raunchy Instagram photos. She’s been getting international press coverage and it recently came out she’s apparently a Guns N’ Roses fan. The doctor works in the emergency room and took some raunchy photos of her in uniform. It’s funny with the timing of this story considering Guns N’ Roses recently played Moscow.

But Anastasia Ivashevskaya, 26, has now come under fire for her slew of sexy snaps taken while wearing her scrubs and a nurse’s outfit.

Hospital administrators in Moscow where she works were so red-faced they demanded the Hippocratic hottie take them down.

Female co-workers were also furious about the saucy snaps that feature the risque Russian in — and out — of her uniform.

The report stated: “Her colleagues are against Moscow’s sexiest doctor. Anastasia works in an emergency team and posts explicit pictures … even in uniform. Her women colleagues are demanding she deletes the pictures, considering them inappropriate for a medical worker.”

But not everyone is bothered by Ivashevskaya’s naughty antics.

One fan said: “In which district should I die to see you?”

So far, it’s unclear how Ivashevskaya has responded to her co-worker’s demands.

According to the Daily Mail, she is a fan of Guns N’ Roses, the Joker and computer game Resident Evil.

Apparently a Music Video for ‘I Don’t Care About You’ Leaks Online!

This is a bizarre story. Apparently Guns N’ Roses may have in fact done a music video for ‘I Don’t Care About You’ for “The Spaghetti Incident?” I have personally seen the video and it appears to not be fan made because I have never seen some of these pro shots before. The entire video consists of live footage from the band’s Skin N’ Bones Tour from 1993 shot in Black and White. It’s basically a montage of different shows from 1993. The video ends with Slash pouring himself a glass of Jack Daniels and smoking. Below are some photos from the video!

Slash and His Girlfriend Hang Out In Tallinn, Estonia!

Slash and his girlfriend Meegan Hodges were photographed in Tallinn, Estonia during Guns N’ Roses recent stop as part of the ‘Not in This Lifetime Tour’. Check out the photos below! 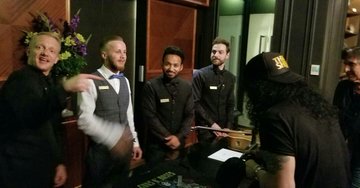 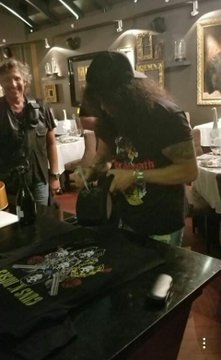 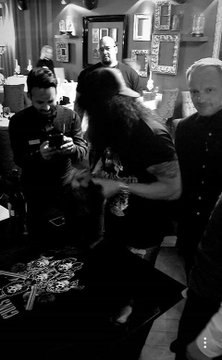 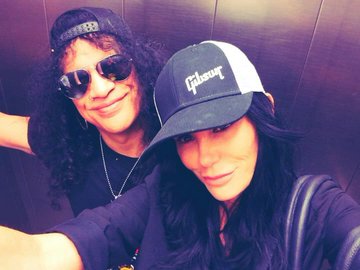 The official lyric video for GUNS N’ ROSES‘ previously unreleased acoustic version of “Move To The City”, taken from the “Locked N’ Loaded” box reissue of the band’s classic 1987 debut album, “Appetite For Destruction”, can be seen below.

The “Appetite For Destruction: Locked N’ Loaded” box is the one true GN’R Holy Grail. The box includes the Super Deluxe Edition with four CDs featuring the album newly remastered for the first time ever; “B-sides N’ EPs” newly remastered; the previously unreleased 1986 Sound City Session N’ More recordings; a Blu-ray Audio disc with the album, bonus tracks and music videos in brand new 5.1 surround sound along with the unearthed music video for “It’s So Easy” originally shot in 1989 but never finished; and a 96-page hardcover book showcasing unseen photos from Axl Rose‘s personal archive and a wealth of memorabilia.

Among the rare and previously unreleased material are two songs GUNS N’ ROSES recorded with producer Mike Clink, “Shadow Of Your Love” — laid down during a trial session that resulted in Clink getting the production job — and an acoustic version of “Move To The City”, which was recorded during the “GN’R Lies” sessions. Additional highlights of the unreleased audio include the first two work-in-progress recording attempts of the 1991 epic masterpiece “November Rain” which was originally penned as the ballad for “Appetite”, covers of songs like Elvis Presley‘s “Heartbreak Hotel”, AEROSMITH‘s “Mama Kin”, two distinctly different recordings of THE ROLLING STONES‘ “Jumpin’ Jack Flash” (one electric, one acoustic) and two never-finished tracks/jams, “The Plague” and “New Work Tune”.

On the vinyl front, the original “Appetite For Destruction” album has been broadened to 2LPs for the first time, including expanded gatefold jacket art and a limited-edition foil printed plastic slipcase. The music itself is being presented on three sides only for maximum audio fidelity, with the fourth side featuring a vinyl Hologroove Hologram of the band’s iconic logo. Seven seven-inch singles are also included: the five original singles from the album, plus one for “Patience”and a new song, the aforementioned “Shadow Of Your Love”. All of the bonus tracks appearing on 12-inch vinyl will only be available in the “Locked N’ Loaded” box, including a reissue of the band’s first EP, “Live ?!*@ Like A Suicide“.

Disc One – Appetite For Destruction