Slash featuring Myles Kennedy and the Conspirators played a show at the Van Buren in Phoenix, Arizona last night. The setlist was pretty much exactly the same as the two shows at the Whisky this week. Check out the videos from the gig below! 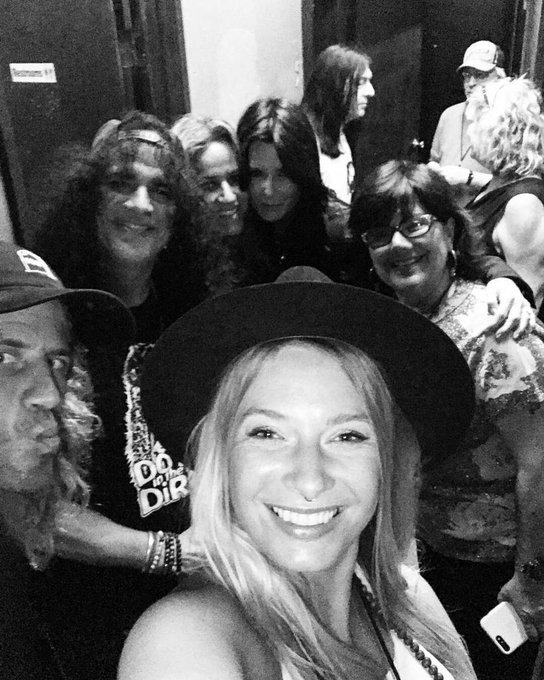 Slash and Meegan with Kat Benzova, Beta and Vanessa Lebeis at the Wisky a Go Go. Photo by Kat

A new interview has surfaced on YouTube of Poison Drummer Rikki Rockett talking about auditoning guitar players for Poison. If you guys remember, Guns N’ Roses guitarist Slash auditioned for the band. Rocket revealed that Slash was upset over not being offered the guitar spot. Rocket did ellaborate that Slash and him are now friends. Rocket said that CC Deville who ended up getting the guitar spot had something that Slash didn’t. Slash always claimed he played the song well in his audition and he didn’t like the look of the band. Check out the interview below

In a brand new interview with Yahoo! Music, GUNS N’ ROSES guitarist Slash was asked if he thinks the band’s catalog has aged well in the wake of the #MeToo Movement. “I’ve never thought of that,” Slash responded. “It’s never crossed my mind. I mean, I think when the #MeToo thing really blew up, the thought crossed my mind of a bunch of musicians, not particular ones, but just musicians [who might be implicated]. But for the most part, as far as all the ones I know, it wasn’t like that. We didn’t have that particular [predatory] relationship with girls. It was a lot more the other way around, in some cases. Anyway, so some of the songs and all that were sort of sexist in their own way, but not to be taken that seriously. I don’t think they were malicious or anything.”

He continued: “I never had a working relationship with anybody that I was, you know, trying to pressure into having sx or anything.