Today we take a look at the tragic death of Stone Temple Pilots and Velvet Revolver Frontman Scott Weiland. Check it out below!

Just noticed this morning that former Guns N’ Roses drummer Matt Sorum’s book “Double Talkin Jive” has a release date, cover and synopsis on Amazon. The book has a release date of April 7, 2020. The cover of the book can be seen below!

Drug smuggling, shoot-outs, and never-ending decadent parties: Matt Sorum’s Double Talkin’ Jive could almost be described as the autobiographical equivalent of the film Blow. But rather than becoming a premier drug smugglers, Matt Sorum becomes a world-famous drummer in Guns N’ Roses, Velvet Revolver, and the Cult. Sorum drops out of high school to become a drummer. When Sorum is given the chance to play in the Cult, he is finally able to make a living as a drummer. The very next year Slash and Duff Mckagan recruit Matt to join Guns N’ Roses, and with that, Matt’s life is transformed. When Axl Rose starts turning up at the recording studio more and more sporadically, sometimes not at all, Matt recounts in keen detail how he and the band stagger toward their downfall. Matt and his Guns N’ Roses bandmates Slash and Duff form Velvet Revolver with Dave Kushner and Scott Weiland. When Weiland suddenly leaves the band, Matt steps in as drummer for Motörhead during their US tour, and then starts his own all-star band, Kings of Chaos. During his time as a professional drummer, Matt battles alcohol and  addictions, but meeting his girlfriend, Ace Harper, helps him manage to go clean. Matt Sorum’s autobiography, written with writer duo Leif Eriksson and Martin Svensson, avoids all the usual rock biography cliche

GUNS N’ ROSES bassist Duff “Punk Rock” McKagan has released a new video for the song “Cold Outside” from his solo album “Tenderness”. The clip deals with the growing homeless crisis in the U.S. and is being released on “Giving Tuesday”. The release coincides with a Propeller campaign that benefits Seattle’s Union Gospel Mission.

The video is designed to help raise awareness and support during the holiday season for the Mission and their work to provide emergency care and long-term recovery services to the hurting and homeless people in the greater Seattle area.

Mr. Punk Rock would put out a statement saying the following

“In my early days, I was in similar situations,” recalls McKagan, “so I know what it’s like to not have anyone to turn to and sometimes need a helping hand to get back on my feet. I know many know others in need and I am hoping that, if we come together, we can help make a real difference.”

McKagan has donated memorabilia as part of the Propeller campaign with all proceeds going to Seattle’s Union Gospel Mission.

Through the Propeller platform, fans will be able to earn points as they “take action” by volunteering at the Union Gospel Mission, donating to the Mission, sharing the campaign info on social media to help spread the word, and buying donated memorabilia. Items include a signed Litho, a signed “Tenderness” deluxe LP, as well as a “Tenderness” U.S. tour t-shirt, wristbands and more.

All donations made on Tuesday, December 3 will be matched dollar for dollar (up to $60,000) by an anonymous donor.

For more information on Propeller, go to here.

Hair metal band Poison’s website has a countdown clock with some thinking it could be a major announcement regarding their upcoming tour with Motley Crue and Def Leppard next summer.

Poison Frontman Brett Michaels revealed last month that he was working on “something incredible” in regards to the band’s touring plans.

Poison last released a studio album in 2007 called Poison’d! cover album of rock ‘n’ roll songs with their most recent album of original material going back 17 years with 2002’s Hollyweird. Michaels told Loudwire last year, that at least one new Poison song to be released by the time within the next year saying

“We’ve already written one song on the road that we’ve been jamming at soundcheck,” Michaels said at the time. “It really sounds good — it’s a very modern song with a great feel and [a] great hook.”

Knotfest Mexico Ends in a Riot

This weekend Slipknot’s traveling festival Knotfest Mexico ended in a riot similar to the old days of Guns N’ Roses. According to reports once a barricade was pushed down during Behemoth’s set earlier in the day,multiple attempts by the festival organizers to fix it failed. Slipknot would cancel their headlining set over security concerns and Evanescence also cancelled their show.

#Knotfest started trending on Twitter and some of Evanescence equipment was destroyed and posted on social media.  Evanescence drummer Will Hunt’s kit — went viral. “It literally breaks my heart to see @evanescence equipment being destroyed at #knotfest. To the people who went on to destroy their equipment, you’re a bunch of cowards. Malditos perros!,” tweeted one fan, while another concertgoer eloquently added, “This doesn’t represent metalheads nor mexicans. Only morons that can’t behave properly.”

“Due to unforeseen circumstances, Slipknot were not able to perform at last night’s Knotfest,” the band commented in a joint statement. “Security barricades became an issue, and it was decided that for the safety of the fans, neither Slipknot or special guests Evanescence could take the stage.

“We had hoped to be able to perform today, but regrettably, a situation arose onstage after the cancellation that damaged or destroyed gear that would have been necessary to play.

“We are extremely disappointed that we did not get the chance to perform, but  the safety of our fans and our community is our biggest priority.  We will look to get back to Mexico sometime in the future.”

Evanescence commented on the events in a video posted to Instagram. “We are heartbroken we didn’t get to play for you tonight, México City,” the band captioned the clip. “Your safety, your life is more important than any show! We love you and we will be back soon, that’s a promise.” See below. 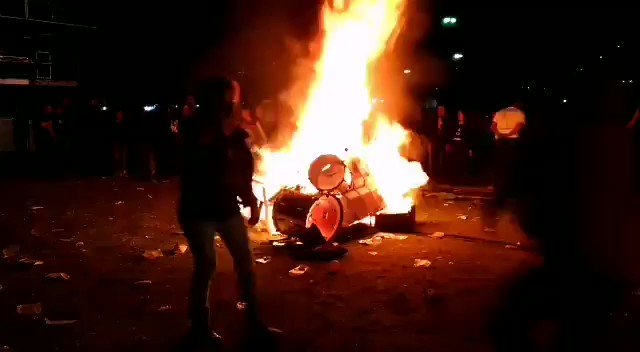